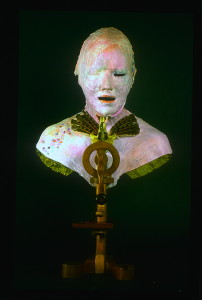 This mask was made soon after my husband’s death from a rare Leukemia and the complications of a bone marrow transplant. The mask represents the depth of my grief and a spiritual dimension of art making. While contemplating the piece, I selected objects such as Lotus leaves and Orange Flicker feathers (a bird considered to be sacred to the Hopi). I also chose objects to represent the way I felt scratched and cut as a witness bearer,…. such as barnacles. The mask is mounted on a wooden art piece that mimics a microscope, with a hand crank, and a thumb pressing down on a slide of blood. These odd objects and their juxtaposition represent the oppressive nature of terminal illness in today’s world, hospital environments, and especially bone marrow units. The feathers and Lotus leaves represent a wish for a kinder way to treat and heal those who are gravely ill, they also represent my personal quest to bring transcendence to the living and dying process. 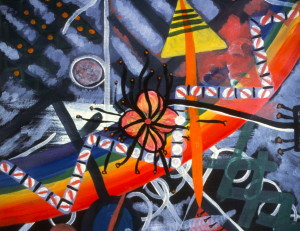 In 1999, I was living in Tucson, Arizona while completing a guest internship at the University of Arizona with Gary E. Schwartz, PhD and Dan Shapiro, PhD. During one waiting period, waiting for feedback from my doctoral committee, I spent time wandering in the desert. I also spent time with Ramona Johnson, a retired nurse, now deceased, who had worked and studied with Michael Harner, author of the book, The Way of The Shaman.

During a vision, I saw a beautiful mandala, one that suggested or predicted a healing of my relationship with my mother. I have to admit I was a bit skeptical. My mother, a debutante, alcoholic, and a prescription drug addict, had not been part of my life for decades. In fact, I attributed a good portion of my success in life to having set good boundaries with her, even walls when necessary. Nonetheless, I had a strong urge to paint this mandala as accurately as possible on the desert floor. In my mind, I was able to see clearly the shapes, colors and proportions of the mandala (a sacred circle).

Yet, in my mind’s eye, I had not fully considered the color of the red sand, the burning fire, or the dying embers, as the perfect backdrop for the mandala design. The whites, yellows, blues and black of my desert floor painting stood out in beautiful contrast to the red. The painting, when finished, was ten feet in diameter. I still laugh when I think of how much money I spent on colored sand.

While painting the mandala, I thought of my life, my mother, our relationship, Carl Jung, and the Indigenous Peoples. I prayed to the Holy Trinity, the archangels, and the elements of nature. As I worked, I thought of my work as an “active meditation,” versus Carl’s, “imaginative action”. I prayed for my mother to be liberated from her heartbreak and despair. I prayed for my liberation from painful memories.

I remember a moment when I felt intensely free, free from debt and free from being owed a debt. I deliberately and very consciously let my mother go with love as I watched the fire burn to ash.

I didn’t know what to expect as I prepared to leave. As I was packing I turned to look at the Catalina Mountains to see a double rainbow across the sky. I thought of God’s promise to Noah, that there were to be no more earthly destructions of grand proportion.

Then, as my friend drove the car out of the desert, I caught my breath. I asked, “Did you see that?” She said, “Yes!” I asked, “It was the infinity symbol right?” She enthusiastically nodded her head.

In front of our car, a completely straight, vertical lightening bolt seemed to stop suspended in air, then break off to form half of an infinity symbol, then descend to the ground with a cracking sound.

As if the double rainbow had not been significant enough, the broken infinity symbol was difficult to dismiss.

A common research axiom is that, ‘coincidence is not causality”, and I would like to add for the purpose of this discussion, nor does it always have meaning. Yet Carl Jung wrote about the collective unconscious and the importance and meaning of synchronicity. How I make sense of  it is like this, I pray to communicate with God and synchronicity, especially in nature, is the way that God speaks back to me.

Years later, I decided to go be with my mother while she was in Hospice. I went to serve her, without any expectations in return. For over two months, I saw her daily for 4-5 hours a day.

For the woman who had nearly killed me with her violence, I did her hair, nails, and makeup.     I brushed her teeth, plucked her eyebrows, and rubbed her feet. I brought her flowers and ice cream. I decorated her room, and then called her old boyfriends and asked them to visit her. I asked them to tell her what they had told me, that she was the most beautiful woman they had ever known. After one visit, she giggled, batted her eye lashes and asked me, “Do you think I should go with him? He was always sort of a bad boy.”

Mother, due to decades of drinking, had become a complete quadriplegic, her hands and feet were curled up and useless, and she was on the nursing home ward for those with dementia. Even with these major challenges, unexpectedly she began to say things to me she could never say before. Her eyes would soften and she would say, “You are so beautiful,…. you are so smart,….. you are so kind,” words I had longed to hear as a child. There were even a few times, with a shockingly sober look, she would say, “I am so sorry for what I did to you.”

I can remember thinking, “Wow, fifty years later….. is this enough?” 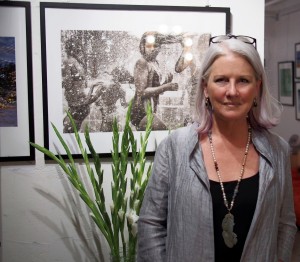