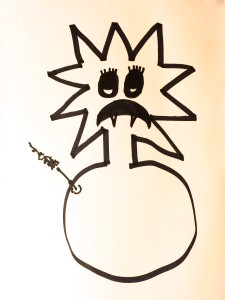 In 1985, I was hired by CareUnit Hospital in Ft. Worth as a drug and alcohol counselor. I had no experience and my one page resume had more space than text.

My supervisor, Mr. Ron Elkins, suggested that I add art processes to my work as a drug and alcohol counselor, since he knew I had experience as an artist and a college educator. He gave me a few suggestions and with trepidation I began to ask clients to draw and paint along with their journal writing.

At the end of my first year, with no experience and little training, my clients had the lowest recidivism rate of any other therapist in a 200 bed hospital. Upon reflection, I believe that there were two important contributing factors to my success, 1) I addressed trauma, abuse, and shame along with the problems of addiction and, 2) I added art processes when ever possible.

During that first year as a counselor, in the year 1986, my younger brother was suddenly hospitalized for a brain mass that was causing him to have severe problems with balance and he had also developed problems with his ability to speak.

When I went to visit him in the hospital he had to hold onto the furniture to walk to the bathroom. I was concerned, even alarmed.

Fortunately, since Tom and I used to paint together as children, I had brought my art supplies.

I really did not have a clear agenda. I had been reading Elisabeth Kubler-Ross and I had also read Bernie Siegal’s new book, LOVE, MEDICINE & MIRACLES (1986).

My brother asked me, “What do you want me to draw?” I thought about an exercise in Bernie’s book on Integrative Medicine and said, “Why don’t you draw the brain mass as a monster, and then make it smaller on each subsequent page….”  Tom began to draw and each time I turned the page he drew the image a little bit smaller than the one before.

I do not know whether or not Tom thought much of the exercise.  I did notice that he appeared to be more relaxed. So, after a short period of time, I left to drive home.

I returned the next day to hear the doctor’s report. By the time I arrived the doctors, Tom, and my father were standing in the hallway. Tom was packed up and ready to go home.

I asked what was going on. Dad said, “His brain mass disappeared, he is going home”.

I was completely excited, first I was SO SO happy that Tom was OK and going home! Next, I thought to myself, “Did our drawing exercise help?” I asked the doctors if they were surprised Tom was going home. They were. I was too shy to ask, “Could our drawing exercise last night have anything to do with Tom’s remarkable recovery?” It was 1985, I knew their answer would be negative.

NOW, 30 years later, I can say exactly what I thought then,….. Yes, possibly, our drawing exercise made a contribution to the sudden positive change in Tom’s health.

Here is a brief list I have compiled for my lecture series.

is able to help patients in treatment for physical illness:

3) Significantly reduces the physiological symptoms of stress of children in treatment for cancer, i.e. heart rate within 15 minutes (DeLue in Malchiodi, 1999)

4) Indications of diagnosis, prognosis, and life span of the severely ill (Bach, 1990)

The art therapies evoke responses precisely at the level at which psychotherapists seek to engage their patients and do so more directly and immediately than do the more traditional psychotherapies.

NOTE: The monster represented in the drawing above is my best approximation of Tom’s drawing of a monster from 1985.