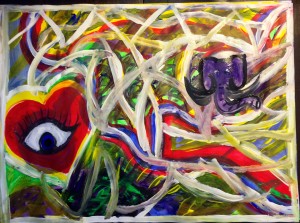 I can remember the medical doctor sitting alone on the floor at the base of her blank 3 X 7 foot life-sized silhouette mandala (body map tracing), clearly filled with disinterest. This author was the workshop leader. I approached and asked, “Do you need any help?” She said, “No!”. I asked her to tell me what was going on. She said succinctly, “I am stuck.”  I responded with a directive, “Then draw that!” She looked surprised and stood up from the floor and asked, “How do I do that?” I said, “You will figure it out, but you can start with a scribble”.

Later, I looked over to see that her body map had an enormous red stop sign drawn in the middle of the chest area. In addition, there was one thick black diagonal line drawn through the stop sign, which meant, “NO!” to blocks, and/or “NO!” to this author’s interference via a painting directive. It almost didn’t matter the original intent of the meaning. When I saw the stop sign, I laughed out loud with joy, and I was completely delighted to see workshop peers walk over to her painting to ask questions. Now she was engaged with the creative process and also with her community of peers.

Creativity involves breaking out of established patterns in order to look at things in a different way.

In the painting above, the client was asked to paint blocks to her creativity. The client was not given further instruction except to follow the paint, in other words, let the paint and her hands think for her mind. In her own words, the painting’s interpretation follows.

The heart with the eye in it represents my heart pumping blood to my veins. All of the colors and twists are the chaos…. The blue eye is the sparkle in my eye. The white is the faith light and love infusing my blood stream (Author’s Note: This includes dendrites and neurons.), to take over the chaos.

The elephant is purple for loyalty and compassion and I chose an elephant as a symbol because they are the only animal that can die of a broken heart – literally….

The painting is called, ‘Hope Transfusion’.

Who has not felt stuck, blocked, empty, thwarted, stymied, or ennui with regard to creativity, whether this means creating a meaningful  life or a creative object? Who has not sought the golden key of inspiration and productivity? I say productivity because a creative mind, has less meaning, if not shared.

“Most of us become so rigidly fixed in the ruts carved out by genetic programming and social conditioning that we ignore the options of choosing any other course of action. Living exclusively by genetic and social instructions is fine as long as everything goes well. But the moment bioloical or social goals are frustrated- which in the long run is inevitable – a person must formulate new goals, and create a new flow activity for himself, or else he will always waste his energies in inner turmoil.”

Most of us have had a moment of creative flow, even if it seems as if the last time was in early childhood, a moment when we were completely absorbed in a task, often with abandon and joy. There are those who argue that there is a difference between creative flow and a meditative trance. That is a very real possibility, and if so, I hypothesize that they overlap and intertwine.

It is essential to embrace the challenge of dancing with or breaking down our barriers to productive creativity, whether we are intent upon creating a meaningful life, a painting, sculpture, script, novel, poem, musical score, or dance routine. The good news is that confronting and challenging creative blocks is, in and of itself, creative. The solution can be as simple as painting the very object or dynamic that has you stuck. This activity demystifies and disempowers the monster named,  THE BLOCK.

If you are interested in creating more creativity, please call me for a session. My phone number is 310-880-9761.