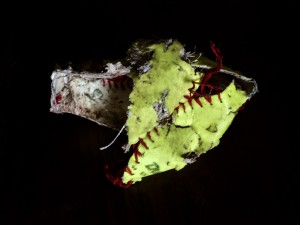 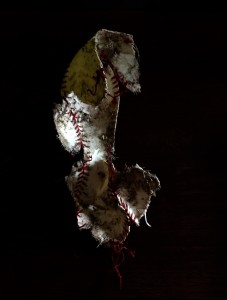 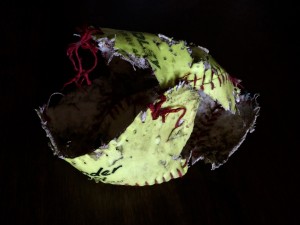 This week I found the skin of a baseball with no insides, as if the innards had been ripped out by a malevolent hand. The crisscrossed red seams stand out boldly against the yellow cover, mimicking the appearance of surgical stitches.

I feel as if my heart has been torn open and sewn back together without anesthesia. I ponder the reason for such a visceral response.

I pick up and hold the piece of seemingly innocuous trash.

According to private conversations with various agency personnel, over a thousand children have gone missing from the LA foster care system within a year’s time. They have most likely been kidnapped, traded or sold, into child sex trade or organ harvesting, or child sex trade then organ harvesting. It has been reported that gang members and traffickers are able to earn $250,000.00 per sell of a child.

How have we allowed ourselves to decline to such levels of depravity in the United States of America?

Human slavery, which includes child sex trade and trafficking, is the second fastest growing illegal business industry in the U.S., second only to drug dealing.

Timothy DeFoggi a former director of cybersecurity at The U.S. Department of Health and Human Services (HHS), which includes CPS oversight, is now serving a 25 year prison sentence for using the dark web for profound child pornography, and soliciting a meeting with a man so that they could realize their mutual fantasies to rape and murder infants and toddlers. Unfortunately, even after he was indicted for child pornography, his top secret security clearance was not immediately revoked. Timothy was in a perfect position of skill and power to identify and set up children within the system of CPS for kidnapping.

There is also an investigation regarding the illegal selling and improper adoption of infants via CPS staff members for a fee of approximately $25,000.00 per sale.

I am a psychotherapist who has listened to child sexual abuse and torture for thirty years, and even I cannot bear this information, certainly not alone.

Please do not think that because your child is a member of a higher socioeconomic group that he or she is safe. A false belief would follow from that cognitive error, that this community issue although tragic, is not yours. The traffickers have learned that children with beautiful hair, skin, straight teeth and good health sell for higher rates, especially in foreign countries. They have also learned that children who come from privilege, are easier to coerce, bully and intimidate. Privileged children do not often have the same level of toughness of children who have been neglected and hungry and therefore have had to forge for themselves in a hostile world.

Please consider donating your time and energy to reputable organizations who do their best to intervene upon this tragic and quickly growing phenomenon.

The eviscerated baseball, reminds me that the organ harvesters take the heart last.

« Sand Play and Synchronicity
CREATIVE BLOCKS: Through to Flow »