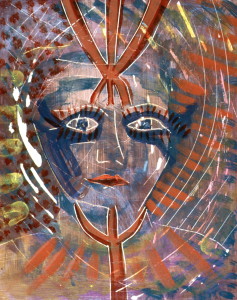 Completing research on the topic of self-mutilation by women who have a dissociative identity disorder was fraught with the normal challenges of research and research writing. Yet, due to the complex trauma and profound dissociation experienced by the research participants, there were additional mirrors of complexity reflected in the process of data analysis.

The terms self-harm and self-mutilation are often used interchangeably for those who self-injure. Due to the extreme forms of self-harm by those in my study, self-mutilation was determined to be the more correct term. This term is not a judgment, but the correct nomenclature for the experiences described by my research participants.

I have worked with those who present with a history of profound trauma, dissociation, and often co-occurring self-harm or self-mutilation since 1987. Even so, I was not prepared for the unfiltered impact of listening. Every interview in my study lasted four to five hours. In each interview, I heard explicit, detailed, and often excruciating truths about how people physically hurt themselves. I listened to their stories uninterrupted for four to five hours at a time.

I had not realized how helpless I would feel in the role of researcher.

As a researcher, versus seasoned therapist, I was not able to intervene, offer treatment or soothing statements, or even (the lowest form of counseling) a temporary quick fix solution. My job was to be an objective listener, to record, and document. I listened to women describe scraping their skin, sometimes down to bone. I felt scraped down to the core of myself. I had no defense.

I collected the visual and verbal data. I then listened to the tapes and read the transcripts of each co-researcher’s interview, revisiting again and again the detailed descriptions of self-mutilation. I lost patience. I felt saturated with blood.

I lost interest and motivation for my study. I began to procrastinate. For the first time in over a decade, I experienced counter-transference regarding the topic of self-mutilation. I felt the helplessness of my co-researchers and at the same time I felt helpless, as well. While I felt the intense emotions as my own, I also projected my sense of helplessness outward—the phenomenon of counter-transference.

Counter-transference—a therapist’s or researcher’s projecting of their uncomfortable emotions outward to a client or research participant—is a defense and, therefore, biased. The inspiration for my study was my hope that a description of self-mutilation in the words of those who suffer would help promote compassion in service providers. One co-researcher described a medical doctor withholding anesthesia while sewing up her wounds stating, “If you could do this to yourself without it, you don’t need it now,” which is untrue. Once the trance has faded, the pain increases.

I was running out of time and money. Tension was building, I knew that my stance of procrastination was not sustainable. Time, a significant element for those who self-mutilate, was beginning to be a critical element for         me, as well.

I decided to paint a self-portrait as if I was a person who engaged in self-mutilation, to walk in the shoes of the women in my study—my overt attempt to achieve epoché, a time when all judgments are suspended.

I chose my art supplies carefully with the goal of epoché in mind. I decided to use clay-board in- stead of canvas. Clay-board is made with layers of earth clay adhered to a masonite panel and then sanded to a very smooth finish. The smooth, fine-grained clay surface is not unlike the texture of skin. The hardened clay can be etched and scraped.

I used a blind contour drawing process first used by European artists such as Rodin and Picasso: I drew without looking at the paper. I was surprised, and not surprised at all, at the intensity of emotion I channeled into the brush strokes. I painted and then rubbed out the image, left shadows to be seen. I painted again; my strokes were more bold. I painted again and scraped cuts into the clay board with an exacto knife, replicating even the same instrument often used for self-harm. I painted over the scrapes but that was not satisfying enough…so I cut again.

I consciously placed the ancient symbol for psychology at my throat.
I focused on my eyes and I left what looked like drops of blood amid the whirl of an energy storm.

I sat back, looked, and felt relief.

Over the next few days my energy returned. I felt a renewed interest in the topic. I began reading academic articles again. I was able to read the transcripts of the interviews carefully with analysis in mind. My compassion returned. Most importantly, I felt an embodied sense of the elusive epoché.

This was a phenomenological research study and therefore I included art and poetry, as well as the verbal text, created by those who participated. The primary guideline was that the art and/or poetry collected was to be closely related to the research topic. Everyone in my study drew a life-sized body map tracing (“life- sized silhouette mandala,” Scott and Ross, 1999) with detailed drawings depicting self-harm, the location on the body, and the type of self-harm. The body map was done in addition to other artwork and poetry.

in the middle of the night

with a slowly growing pool of one’s own blood.

To find a razor blade held bloody and dripping in one’s own hand.

And seen the haunted face of the other.

At times the individual is disconnected from physical pain. On other occasions she suffers greatly. Even when the burns are third degree, the experience of pain is variable. The same experience of burning may engender a wide range of expressions of physical pain or emotions, including denial. Burning is an outward manifesta- tion of inward pain. Pain is experienced as something that can be moved, not alleviated. Pain or guilt is moved from an internal experience to an external experience. Moving the pain detracts from the original source of pain and guilt.

Self-mutilation scars are used to prevent sexual intimacy. These marks soothe feelings of vulnerability. The individual is terrified of her sexuality. She feels vulnerable to her own desires. Her body is marked with wounds and scars which she experiences as ugly, thus informing abstinence. The individual uses self-mutilation to set sexual boundaries. She will not let others see her wounded body and so she is less likely to engage in sexual activity.

Her desire to keep her behavior secret creates barriers beyond the sexual boundaries and encourages isola- tion. She keeps her behavior a guarded secret due to embarrassment and shame. Her methods of secret keep- ing include hyper-vigilance, pretending to be “normal,” or overt lying even though lying is not part of her value system. She spends a lot of time and energy hiding her wounds. Self-mutilation is an attempt to control the inner world of feelings and thoughts.

There are actions, such as rules, which are created to control the self-mutilation. This is like the lion chasing his tail. The greatest fear is loss of control. Yet, loss of control is common. The individual relates more to her behavior of self-mutilation than to herself. She interacts with her behavior as if it were a live entity, a personification of her behavior. She has rules to control “it”. Her control mechanisms have not worked and she has failed to stop her behavior. She feels hopeless about establishing control. Control seems to be in the hands of this “live entity” which is outside of herself. The behavior has control of her, not the other way around.

Self-mutilation is experienced as a method to burn away all of the filth and impurities. The individual feels punished by herself. Her self-punishment is closely related to her sexual thoughts and feelings. She feels deep shame and guilt. Her guilt is focused on her thinking and behavior while her shame is about her sense of worthlessness. She feels hopeless about breaking the cycle of self-harm and self-punishment. She also perceives her self-mutilation as a way to express her sadness and grief.

She does not try to excuse or defend her behavior. Feelings of hopelessness are heavy and pervasive. There is hopelessness about stopping the behavior and about life in general. The individual perceives her behavior to         be about the reenactment of an abusive experience and dynamic. As a child her caretakers were disrespectful to her body. She believes that her self-mutilation is always related to her childhood, just not always in the same way. This reenactment includes self-punishment. Her communications to God include desperate cries for help and relief. She is willing to surrender all for Divine intervention. In this case, the term “sacrifice” may be a correct label for her intense forms of self-harm.

The decision to take personal responsibility is important if significant changes are to be made. It is also important for the individual to know that others care. Telling others of her secrets and knowing they care is an essential component of healing. Conflicts regarding disclosure are based upon the fear of influencing or frightening another. There is also fear of rejection and judgment. Yet, disclosure is a primary factor in healing. There is much to grieve before the self-mutilation starts. Once the actions have become entrenched, the consequences add to the existing grief. Any relief self-mutilation offers is temporary. The long-term negative ramifications of self-mutilation are profound (Scott, 1999a, pp. 243-245).

Although this case of a person actively engaging in self-harm at the time of the study is profoundly despairing, as with those who have chemical addiction, people recover no matter how far the road of trauma reenactment has taken them.

ABOUT THE AUTHOR: Dr. Ericha Scott, licensed as E. Hitchcock Scott, PhD, LPCC917 in California, has 31 years of professional experience working with those who have co-occurring addictions and complex trauma. She has published research in peer review journals, in the Unites States and abroad, on self-mutilation by dissociative disordered individuals and her theory of creative arts therapy for trauma and addiction. Her contribution to the book, Integrative Therapies for Addiction Treatment, will be published by Oxford University Press by 2017. Dr. Scott has run a graduate program in counseling psychology, worked as the clinical director for several treatment centers, and has hosted her own TV show for 2 years.

Dr. Scott, who is also an artist and a certified interfaith spiritual director, continues to contribute to the fields of addiction and trauma with a deep sense of passion and commitment. Dr. Scott has six licenses in four states and is a Board Certified Registered Art Therapist and Registered Expressive Arts Therapist.