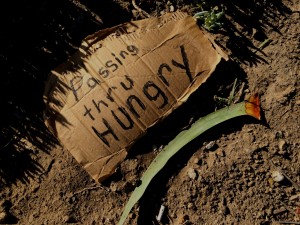 In the early 1990’s, I volunteered to photograph people who live on the streets for an amateur documentary. For this project, I used black and white photography, and hand colored the images.

Within a few minutes after my arrival downtown, I was threatened, at first with a six foot metal pipe, then someone offered to slash my tires, another called me names.

I was told I could photograph my slashed tires. Realizing I had no power, nor did he, I said, “You can slash my tires, but I will not photograph it, I am not here for that.”

Although shaking, I refused to give up. I kept listening to the fear of those who do not have a door to lock. I heard about the coercion they felt that often accompanied the handouts, most likely a long stereotypical sermon.

At the end, after time, I was trusted. Several people actually set up their own photo scenes to demonstrate their addiction, or poverty, or loneliness.

Two men, the one with the metal pipe, and the one who threatened to slash my tires, apologized. The largest man grabbed both my hands in his and said, “God Bless You!!!

I see these signs, like the photograph I took this week, and I think of them, their humility and their kindnesses to me in spite of their fear and despair.

As clients grow and mature in counseling, they become less focused on petty concerns and more aware and attentive to global suffering. This has been observed in people from all walks of life including a study of men in prison, after a period of intensive neurotherapy. (Elmer Green, PhD).

Frankl states, “In some way, suffering ceases to be suffering at the moment it finds a meaning”.

Bruce Douglas and Clark Moustakas (1985), wrote about existential processes, “Through disciplined focus on the structure of experience (e.g., time, space, materiality, causality, interpersonal factors), the phenomenological investigation attempts to reveal the actual nature and meaning of an event, perception, or occurrence, just as it appears” (p. 43).

There are times that a photograph is essential to the process of focus, attention, exploration, revelation, and meaning. 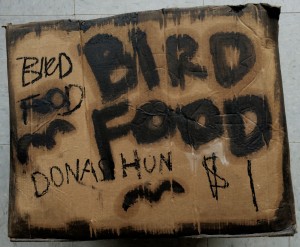 « Anorexia, Body-Image Dysphoria, and Art Therapy
Mandalas as a Way to Embrace the Dialectic »