Most addiction programs teach a model of birth order and dysfunctional family roles. Identifying these roles are important for several reasons, they are able to reduce shame and help people ponder, reassess, and intervene upon assumed ways of relating to others.

Quite often a person in treatment identifies which role best suits their position in the family system. Examples of roles are: hero, scapegoat, lost child, and mascot. Karpman’s Triangle provides another taxonomy of roles: perpetrator, rescuer, and victim. I like Dr. Renee Fredrickson’s addition to this list, the role of denier. One of the important lessons regarding the Karpman Triangle is that we may assume various roles at different times, as if a game of musical chairs,…..  except no one wins.

When I ask a client to paint a life-sized silhouette mandala (body map), I ask them to include all aspects of their bio and psychological history. They are asked to list and paint on the body map where they have knowledge of or a somatic experience of: consequences of addiction(s) and untreated mental health problem(s), trauma, abuse, accident(s), surgery or surgeries, positive and negative spiritual experiences, self-harm and/or self-mutilation…. etc. For those who have a history of childhood sexual abuse and also, seemingly by chance, a history of gynecological problems, important links of understanding are made regarding how the body becomes a testament to the untold story.

In the body map below, the client identified with the role of victim. As she began to portray her experience of the role, she placed footprints across her body, as if she had been walked on. I had turned away for just a second to hear a stomping sound. I turned to see that not only was she marking a symbol of her role, but she seemed to be stomping on the symbol of herself with a remarkable level of intensity. I asked, “Are you painting or are you stomping on yourself?” The answer was a shy, “Yes.”

This question brought to the surface several important discussions, but for the purpose of this post, we will address one. There are times victims hurt themselves in an effort to show the perpetrator the damage done, and/or to punish the perpetrator who may not appear to feel remorse. The problem is that actions of this form of self-harm, conscious or unconscious and even understandable, backfire.

Through visual imagery, a safe way of processing, self-harm dynamics are able to be illuminated, which enhance the potential for open dialogue, understanding, and healing. 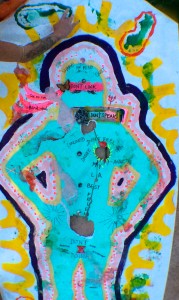