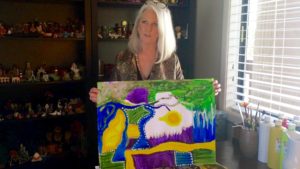 ABOVE IMAGE: Dr. Scott holding artwork by a client.

Ego-state therapy is not new, in one form or another, it is an ancient concept.

Most likely the first predecessors of ego-state therapy were when medicine men and women wore masks of the deities to enhance their performance during healing rituals. The masks, representing the deities, may have empowered the belief that the healers were channeling divine energy.

We now know, more than ever, how much belief can positively impact healing outcomes.

Many therapists and theorists have discussed, hypothesized and used ego-state therapy in their work, including but not limited to, Freud, Jung, Helen and John Watkins, Hal and Sidra Stone, John Rowan, Charles Whitfield, Pia Melody, Fritz Perls, and Eric Berne.

Inner child work, commonly used in the fields of addiction, codependency and adult children of alcoholics treatment, is a form of ego-state therapy. This process, more than most, is able to help a client experience insight, forgiveness and self-love.

Ego-state therapy is a psychodynamic approach that works with inner aspects of self as if a family within. More succinctly, the therapist is facilitating family therapy within an individual client. We all have adult, parent and child ego-states – it is just a question of degree.

There is a wide continuum of ego-state functioning from normative (everyone has them in a mild but functional form) to the extreme, which means that the ego-states function autonomously to the point of severe inner conflict, power struggles and amnesia.

I tell my clients that they may have have introjected inside of themselves their family members and also their family dynamics. If their family members loved each other and communicated well then the adult will have that type of inner dynamic, and sadly, the converse is true. If the client experienced a chaotic, painful, conflictual or even a violent childhood, then their own inner dynamic will mirror what they observed.

The more profound the childhood trauma and neglect, the more extreme the splits and conflicts between states of self.

More often than acknowledged, clients have experiences of regression, when they feel younger and/or smaller than their physical age. Associated with regression is a sense of overwhelm, powerlessness, helplessness that often contradicts a client’s established competency as an adult. As a clinician, I find I spend as much or more time helping clients access an inner adult, as I have spent helping them access an inner child.

Twenty-five years ago an adult ACoA male told me, “It is as if I cannot see over the steering wheel on my way to work, I feel as if I should not be driving a car yet”. Around that same time I sent a client to a well renowned treatment center for addiction, upon return she giggled, “My addict never attended one group”.     The addicted parts who needed to go to group hid out, and the parts of self who were not drinking attended groups they did not need. It is as if the inner co-dependent rescued and enabled the inner addict.

In many homes where there is active parental addiction, there is a role reversal or role confusion between the parents and the child. This shows up as children who are physically and/or emotionally taking care of addicted parent(s) and/or functioning as a surrogate spouse. This dynamic of role reversal or role confusion is replayed inside of the adult self. The inner child parts or inner child has been taking care of or protecting the adult self to the detriment of all. This is completely understandable, that the inner world of the adult accurately mirrors the childhood dynamic and, in childhood, this worked.

Once a functional client suddenly, it seemed, became dysfunctional. It was as if the learning and progress made from therapy and 12-step vanished overnight. It took a few sessions, but it became clear that a hidden child ego-state had emerged and assumed executive control of the body, to handle for the adult what had appeared to be an emergency.

Instead of using more traditional safe place guided imagery, such as a favorite place in nature (a cave, the beach, the mountains) and/or an imaginary or science fiction/surreal type environment, I decided to use an inner twelve-step meeting setting. I chose the 12-step meeting environment with the intention of accessing recent, but compartmentalized, adult learning.

Paraphrased and Disguised Session of an INNER TWELVE STEP MEETING:

I asked the 11 year old ego-state to help set up a 12-step meeting. She complained, “I don’t know how to lead a meeting, I don’t go”. I asked her to ask for help from an adult inside, but until help arrived she could set up the chairs in a circle. I asked her to include the child parts, “everyone gets a chair”, I said. She said, “They are too little to understand,” and I responded, “That is OK, they are allowed to witness”.

For a while she protested that there was not an adult part of self who could help. I asked, “Who has been going to meetings, who has been taking commitments, who has been working the steps, and who is sponsoring others?”

An adult showed up, but she did not like or trust the 11 year old. Her facial expression was a grimace as she thought about her 11 year old self without compassion or understanding.

I explained to the adult self, “She is a newcomer, how would you treat a newcomer at a 12-step meeting?” She said, “She is more broken than most newcomers”. I responded with irony, “So you would love her less?…. How do you greet a newcomer, no matter how inebriated, unwashed, mentally ill, or unattractive?” She drew upon her years of experience of welcoming and loving newcomers of all types and profiles.

Now that we had an adult part in the inner room and inner circle, life’s circumstances could be better processed with with an adult’s level of competency. Even more, she was able to practice loving parts of self that to her had previously appeared to be unlovable.

To anchor this positive experience, this author asked the client to paint her experience of the session.

It is important to note in general terms that some of the most angry, volatile and difficult parts of self are the parts who hold the most courage and strength. If we push those parts aside, thereby forcing them to remain underground hidden in the subconscious, we deny our own full potential and strength.

Once again there is a wide continuum of normative to extreme with regard to ego-state functionality and sense of separation. The good news is that the techniques that help normative or healthy ego-states can be applied to those holding more trauma and therefore separation from the self.

A while back I posted a bit of information about this process on Facebook and a man in recovery posted a story he had heard from a 12-step podium. A man was at risk of using alcohol in the middle of the night, he could not quiet the voices in his head urging him to relapse. He did not feel as if he could wake up his sponsor at 4 AM, so instead, he set up a circle of chairs in his living room, and held a midnight meeting. All inside voices were allowed to speak. He remained sober through the night. He did was he was told and got himself to a meeting.

As a creative arts therapist, I use creativity to help clients access their resources for healing. It is my intention to do so in a way that empowers the client and teaches them skills they are able to use long after therapy has ended.

The Empress of China, Lyrics by Dory Previn

I tell you how I hate you

In the voice my father used

You answer with your mother’s worn cliches

And in another life

Your father hears his wife

And I see his fury blazing

An echo hears an echo

And my mother’s fist is raised

The hand I clench at you

The way one behaves

Is determined in the graves

Of all the great grandparents

Our fathers fight through us

As they fought their father’s war

And the same old scene’s repeated

And before and before

And when I tell you how I hate you

Before the birth of Jesus

Before the death of Caesar

Before the Trojan war

I tell you how I hate you

And a long decaying anger

Comes alive inside a castle

And behind an ancient door

The Empress of China

Tells her lover how she

Ericha Scott, PhD, “Childhood family dynamics are repeated literally and figuratively until the dynamic has been made conscious inside and out.

If you are interested in the services of Dr. Scott and have an inquiry, please call 310-880-9761, or visit the link above, www.artspeaksoutloud.org.