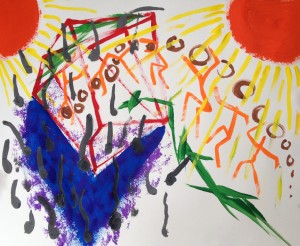 Chemical addiction may begin slowly over time or within the first puff. However the process begins, mayhem follows. For some the mayhem or destruction is cushioned by social systems designed, or not, to protect. For example, there are times that a jail sentence has saved a life.

Even sober drug addicts and alcoholics wonder, “How did I not see what was happening around me?” Of course the obvious answer,… alcohol and drugs numb reality. But there are more complicated answers, such as the cognitive defense mechanisms which can be profound without any chemical assistance. There is also the impact of learning on a naive mind. Almost thirty years ago, I felt great empathy for a man who was very frustrated with his diagnosis of alcoholism. He was drinking a six pack of beer every night, “WHAT do you mean I am alcoholic? My Dad drank a case a night!” I assured him that he deserved credit for not drinking a case like his father, but that a six pack a night was still considered a dependency. There was another the time I worked with a mother of an incest survivor as she processed her denial, “How did I NOT know what was going on, I washed the sheets, I saw the stains,” she lamented.

This is why we need each other. There are times we cannot see ourselves or others in a bright, clear, light. The inability to see is not limited to addiction, or mental illness, but can manifest in normative, and sometimes but rarely functional, blindnesses in business, religious organizations, schools, and even rush hour traffic.

As a past clinical supervisor, there are times I have wished that all therapists would take a drawing class. I say this because a drawing class teaches you how to see reality as it is, instead of stereotypical assumptions of reality.

In college I remember a friend who drank too much. She was not alcoholic and she was not truly drinking more than her sorority peers. She described an evening at a party off campus, as if she had been the belle of the ball. A week later we visited the party host and I watched as the host (an older woman) quietly showed us photos from the week before. She made no comments. I remember my friend’s face as she saw pictures of herself looking – well – a bit droopy. Instead of dancing, she was hanging limply on her dance partner. Now 30 years later, my friend has never developed alcoholism. The gift of being able to see yourself, as others see you, without judgment, is profound and possibly one of the most powerful interventions of future problems.

Using the force of image in art therapy provides us the ability to see from outside in and inside out.

All of us are bombarded by media images on a daily and possibly hourly basis, so much so that it seems to have undermined our ability to form an internal screen of original and personal imagery. Even more than ever, people need to SEE the consequences of their addiction, or mental illness, or dysfunctional behaviors. It is powerful and effective to make a painting, a sculpture, or a sand tray of the consequences of the problem all in one place. Making one painting of all of the consequences intervenes upon compartmentalization, the inability to connect linking causal events. In some circles this function, linking causality and seeing parts as a whole, is referred to as a Gestalt. One woman in my research study who had lost everything due to her self-mutilation said (this is a paraphrased quote), “If only I had seen this body map years ago. Till now, I thought of each event as separate. I had no idea how much damage I was doing cumulatively over time.”

This is why it is important to add visual image to the counseling arena.

I call many of the interventions I use, “A Visual First Step”, because these therapeutic art assignments help us all (client and therapist) see – literally see – the powerlessness and unmanageability of past actions. This first step of integrity, is essential to change the negative trajectory to a positive future.