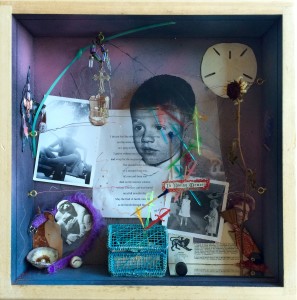 In the early 1900s, shadow boxes or object-boxes were used by artists affiliated with the Dadaism and Surrealist movements. Joseph Cornell (1904-1983) is the American artist most noted for this mode of expression, often using found items juxtaposed in an irrational and dream-like fashion. Arthur Bispo do Rosário (May 14, 1909 – July 5, 1909), a Brazilian outsider artist who used shadow box like creations, was hospitalized with schizophrenia for 50 years. He refused all traditional medical treatment but created art with objects appropriated from the hospital environment. Like Cornell, but with more whimsy, Arthur’s juxtapositions of objects had a dream-like and spiritual quality.

Conroy Maddox speaks of artwork by Joseph Cornell, “Those objects reflect a universe brought back to life. Obeying only the laws of chance or psychic necessity, they establish a kind of canon of the unexpected, lending coherence to a dream world which identifies itself with a new and exiting experience.”

In 1981, while working for The Discovery Center Museum in Florida I implemented a version of a shadow box construction for the child visitors. For a special event, I found approximately ten over-sized furniture and appliance boxes and painted them white inside and out. With most of the boxes, if the box was sufficiently structurally sound, I cut out one whole side of the box. For a few boxes, I cut out only a door. Then the boxes were arranged together, not unlike a Louise Nevelson sculpture, on the front lawn. The children were given tempera paints and allowed to paint anywhere they wanted. The boxes were tall enough that for many of the small children, it was like painting on a living room wall. I can remember children running in and out of the boxes, with brushes loaded with colorful paint, shrieking with glee.

The first shadow box workshop I held for adult clients was in 1992. I had shadow box frames of Poplar built by a local carpenter. I chose Poplar for the frame because it is a soft wood that can be easily painted, carved or burned. At the time, I worked with men and women with a profound trauma history and therefore they were likely to engage in some form of self-harm. With this caution in mind, I designed a shadow box frame, with a slit in the side for the plexiglass cover, as opposed to an attached hinged glass top. This meant that I could hold onto the plexiglass cover until the end of the workshop in order to ensure group safety. I also liked having the availability, for those who self-mutilate via cutting and burning, for workshop participants to be able to do exactly those same activities of cutting and burning to the wooden frames, versus their own bodies.

In the photo above, I have included a shadow box construction I made to commemorate my brother’s life. Tom, my younger brother, died of alcoholism, drug addiction and AIDS at age 33.

Although it may seem obvious, it can be said that art therapy, when it is authentic, is very political. My brother, suffered from the rejection he experienced regarding his sexual orientation.

What emerged from the shadow box construction workshop in 1992 was emotionally moving to me, not only because of what was revealed but also because of the quality of art produced. People allowed themselves to be vulnerable as they grieved losses and memorialized triumphs. Each box incorporated a full life continuum of losses and successes.

As I watched participants paint with awe, I can remember thinking that neither myself, nor my graduate school peers, were as genuine, honest, or creative as the people attending my workshop.

I have said for decades that while trauma blocks creativity, using creativity to process trauma, grief and loss opens the locked door. The carefully placed objects, arranged in the sacred space of a shadow box, “reflect a universe (or person) brought back to life,…. lending coherence to a dream world which identifies itself with a new and exiting experience.”

« Haiku Poetry Therapy for Expression
The Mirage of Happiness: One Root of the Addiction Tree »

One thought on “Shadow Box Constructions for Art Therapy”